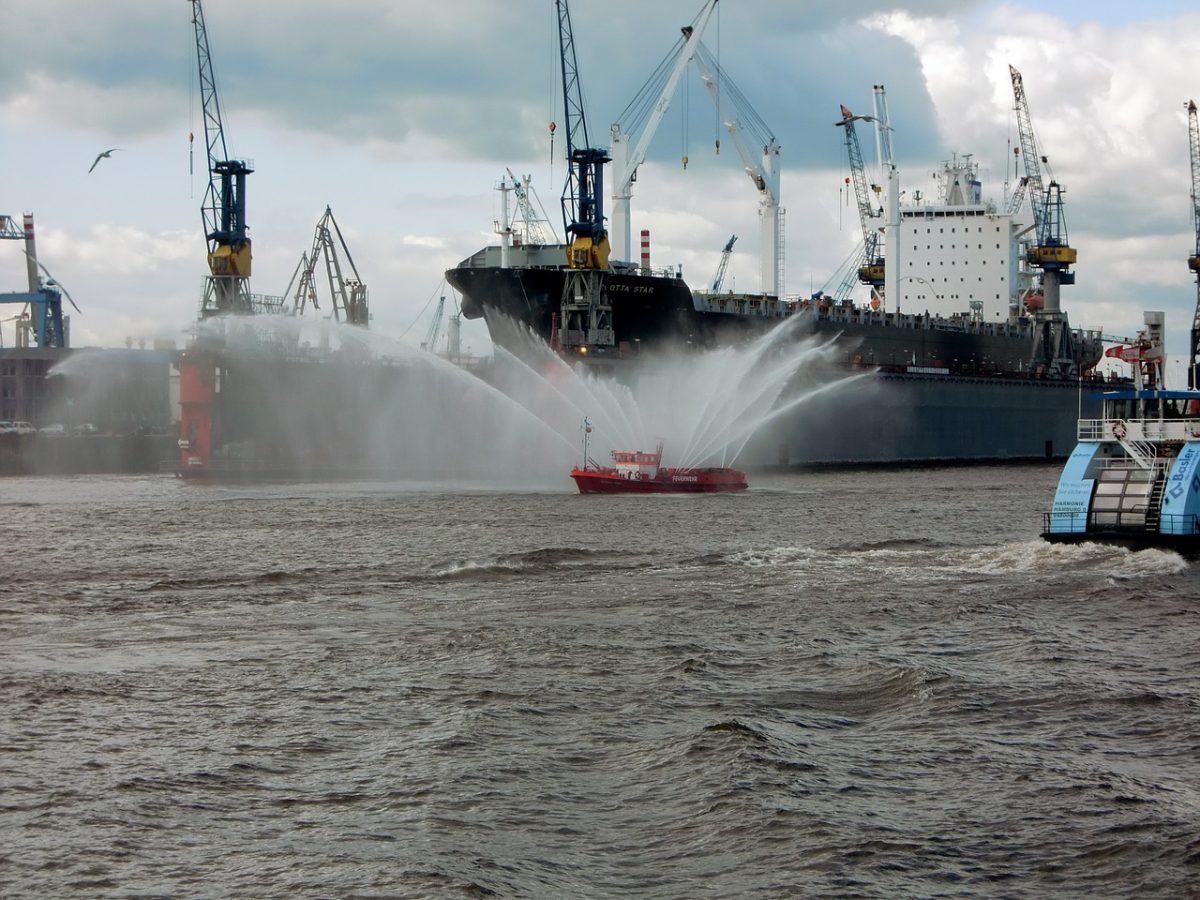 This study details a collaboration between Safetytech Accelerator and Seaspan to explore the feasibility of using novel sensors to provide faster detection of container fires located below deck on ships.

Today, most container ships use fire detection systems that continuously draw air from below deck and direct it to a smoke detector. When smoke reaches the detector, an alarm is triggered and CO2 can be released to extinguish the fire. The downside of the current solution which has been in the industry for decades is that a significant amount of time passes before smoke actually reaches the detector and the fire will almost certainly have spread by this point.

Ships are continuously increasing in size and moving more & more containers every year. Existing technology is often inadequate to provide an effective and prompt fire detection in the cargo hold. On the other hand, seafarers have a significant task trying to extinguish fires with limited resources onboard. Each failed attempt presents a sizeable environmental, financial and, most importantly, human cost.

This study sought to virtually trial novel sensor solutions that could detect container fires faster than the current solutions with comparable deployment and maintenance costs.

Safetytech Accelerator worked closely with Seaspan to outline the technology parameters for this challenge and source startups with novel sensor technologies. From the applications, three high quality startups were shortlisted to pitch their solutions to a panel of judges.

US-based Everactive was chosen to trial their energy harvesting temperature sensors. Their wireless sensors use a proprietary low-power network in combination with wired gateways. Power for the sensors is harvested from small amounts of light and/or temperature differentials, as well as other environmental sources. The battery-less wireless sensors were attractive to Seaspan because they could potentially fit into the 5 year maintenance schedules that are common in the shipping industry.

For obvious reasons we could not set fire to containers loaded on a ship. Instead the feasibility study used the services of Lloyd’s Register’s Computational Fluid Dynamics (CFD) team to simulate fires in a virtual environment.

Everactive visited a typical container ship to learn about the conditions that temperature sensors would need to operate in. The learnings from that visit and the characteristics of the Everactive sensors were passed onto the LR CFD team to accurately simulate the performance of temperature detecting sensors. A representative cargo hold was simulated based on dimensions, container layout and ventilation information provided by Seaspan.

Typical causes of fires could be for various reasons; from mis-declaration, to International Maritime Dangerous Goods in-compatibility, inadequate packaging or pre-stuffing inspection & certification. As an example of mis-declaration, this study simulated a container holding undeclared charcoal which subsequently causes a fire.

The CFD simulations intended to answer the following questions

For the sealed container, the virtual temperature sensors detected a fire in 3:09 minutes before the fire self-extinguished due to lack of oxygen at 4:10mins. Traditional cargo hold smoke detectors would never have detected the fire as no smoke escaped the container. Heat was mostly contained in and immediately around the problem container suggesting that sensors should ideally be placed on the steel harnesses at the ends of the containers. Approximately 26 sensors were estimated to be required for each container wall. As there are 20 container walls, approximately 520 sensors would be required to provide coverage for an entire cargo hold on a typical ship.

When simulating container doors being breached by a fire (ie an explosion), all sensors in the hold quickly detected temperatures above 100°C. In this scenario the temperature sensors would not offer any advantage over the traditional smoke detectors in containing the fire.

A more realistic scenario was simulated where a container was not perfectly sealed, the temperature sensors detected a fire in 2:08 minutes as opposed to 10:15 minutes for a traditional smoke detector located in the exhaust vent stack. Typical cargo holds do not have a smoke detector at each vent stack intake.

Smoke detectors located at the hold’s exterior vents were never triggered as there was always enough air being drawn inwards to prohibit the flow of smoke (during a 28 minute simulation). 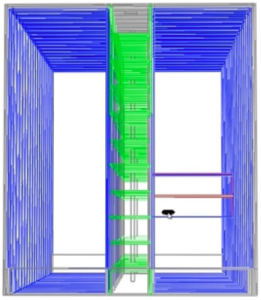 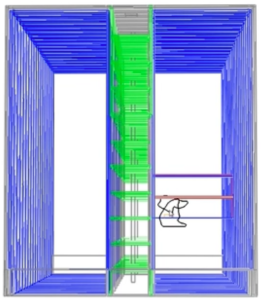 To summarise, the CFD simulation showed that temperature sensors could detect a fire approximately 26 minutes earlier than traditional smoke detectors.

Further trials onboard a physical ship are still required to validate the wireless communications in the dense steel structure below deck. The effort required to install wired gateways also requires further investigation since cables will need to be routed through the ship.

A number of technology companies are now providing sensors that harvest energy from low-light, heat, vibrations, radio signals and electromagnetic induction. Over the next few years more industrial settings will be widely monitored using an array of low maintenance sensors, including container ships.

This feasibility study has shown that in theory there is an opportunity to detect container fires faster than the traditional detection solutions without the need to instrument each individual container within the cargo hold.

Early detection is key in mitigating the risk of fire outbreaks, and protecting assets, the environment and most importantly the lives of the crew.

Seaspan, a wholly-owned subsidiary of Atlas Corp. (NYSE:ATCO) is a leading independent owner and operator of container ships. They charter their own vessels primarily to the world’s largest container shipping liners. As of March 2021, Seaspan’s fleet consisted of 127 containerships representing total capacity of just over one million TEU.

Everactive is a US based technology company that sells battery-less Internet of Things (IoT) solutions. They have developed always-on wireless sensors that are powered continuously and exclusively from energy harvested from the environment.

Safetytech Accelerator is a non-profit established by Lloyd’s Register. It is the first fully dedicated technology accelerator focused on safety and risk in industrial sectors. Our mission is to make the world safer and more sustainable through wider adoption of safetytech.

We use cookies on our website to give you the most relevant experience by remembering your preferences and repeat visits. By clicking “Accept”, you consent to the use of ALL the cookies.
Cookie settingsACCEPT
Manage consent

This website uses cookies to improve your experience while you navigate through the website. Out of these, the cookies that are categorized as necessary are stored on your browser as they are essential for the working of basic functionalities of the website. We also use third-party cookies that help us analyze and understand how you use this website. These cookies will be stored in your browser only with your consent. You also have the option to opt-out of these cookies. But opting out of some of these cookies may affect your browsing experience.
Necessary Always Enabled
Necessary cookies are absolutely essential for the website to function properly. These cookies ensure basic functionalities and security features of the website, anonymously.
Functional
Functional cookies help to perform certain functionalities like sharing the content of the website on social media platforms, collect feedbacks, and other third-party features.
Performance
Performance cookies are used to understand and analyze the key performance indexes of the website which helps in delivering a better user experience for the visitors.
Analytics
Analytical cookies are used to understand how visitors interact with the website. These cookies help provide information on metrics the number of visitors, bounce rate, traffic source, etc.
Advertisement
Advertisement cookies are used to provide visitors with relevant ads and marketing campaigns. These cookies track visitors across websites and collect information to provide customized ads.
Others
Other uncategorized cookies are those that are being analyzed and have not been classified into a category as yet.
SAVE & ACCEPT